Latest screening protocols and treatment for retinopathy of prematurity

Retinopathy of Prematuriy is a disorder of the blood vessels of the retina (the light sensitive part of the eye) that occurs in some premature babies.  Although the exact incidence and prevalance of Retinopathy of Prematurity in Navi Mumbai is unknown, it is considered to be one of the leading causes of blindness in children.

Which infants are at risk for ROP?

In general, ROP is a disease affecting the youngest, smallest and sickest infants.  Typically, this includes infants born earlier than 34 weeks of gestation (“gestational age” means the amount of time since the baby was conceived) and under 2000 grams (about 4.4 pounds).  The smaller and more premature the infant, the greater the risk. Other possible risk factors for ROP include:

How does an infant get ROP?

It takes a full term (40 week) pregnancy for the blood vessels which will supply oxygen to the retina to fully develop.  The blood supply to the retina starts at the back of the eye at 16 weeks of gestation.  The vessels gradually grow over the surface of the retina to reach the front edge at about the time of birth.

When an infant is born early this process stalls.  There are a variety of reasons this occurs, but the most important ones in babies born today are the degree of prematurity and birth weight.

Once the blood vessels stop growing over the surface of the retina, a patch of retina ends up starved for oxygen.  At this point:  either the blood vessels pick up where they left off and finish the growing normally, or ROP begins to develop.

How Can I Find Out If My Baby Has ROP? 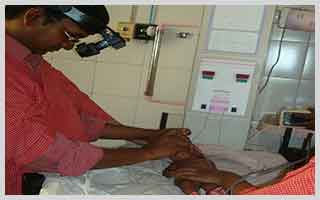 The only way to detect ROP is with an eye exam, preferably by a pediatric ophthalmologist or a retina specialist. Parents of all premature babies should ask their paediatricians if their child should be tested for ROP. Babies born at 34 weeks and younger, and those who weigh less than 2000 grams should definitely be screened for the condition. If your child does need an exam, the test should be done 4 to 9 weeks after birth, depending on when your baby was born. When detected and treated early, visual impairment may be prevented. However, when treatment is postponed, more damage to the vision may occur.

What are the different stages of ROP?

Retinopathy of prematurity (ROP) has been divided into five stages.  Stages 1 and 2 customarily get better on their own.  Some eyes, however, go on to Stage 3 retinopathy of prematurity.  Stage 3 ROP exists when these disturbing new blood vessels grow out from the ridge in the retina toward the center of the eye.  If this blood vessel growth becomes severe and is accompanied by “plus” disease (enlarged and twisting blood vessels in the back part of the eye), the child may reach the point where treatment of the peripheral retina with laser (or rarely freezing) treatment is performed.  When stage 4 or 5 ROP is reached, the retina is detached. Eyes which progress to stage 4 or 5 can go blind.  This may happen even when a child is properly screened and is properly treated in a timely fashion.

What treatments are there for ROP?

Currently, the standard of care treatment for ROP severe enough to require it is to ablate the retina without blood vessels with laser.  On occasion, freeze-treatment (cryotherapy) is used to accomplish the same goal.  By ablating the peripheral retina the goal is to save central vision so that the infant can have as normal vision as possible.  Other experimental treatments are being studied as well – most notably a drug called Avastin (bevacizumab).

Once the retina detaches (Stage 4 or 5), there are surgical therapies which may be employed to salvage vision.

Are my baby’s eye “normal” after treatment for ROP is complete?

ROP is a lifelong disease, whether it resolves after treatment or gets better (regresses) on its own. Premature children are more likely to develop other eye conditions such as nearsightedness (myopia), amblyopia (“lazy eye”),strabismus (cross eyes), glaucoma (high eye pressure), retinal detachment, and early cataract as they grow up. Hence they need to be in close follow up with a pediatric ophthalmologist even after ROP has been satisfactorily resolved

Has your premature baby been checked for Retinopathy??

Retinopathy In Premature Babies: Vision Problems Can Last a Lifetime If Not Caught Early