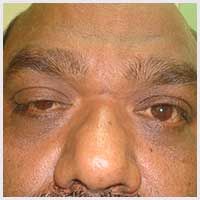 Normally the lids just touch the upper edge of the cornea – the transparent structure in front of the eye. There are a variety of reasons when it may fall down abnormally. It could be due to ageing producing weakness, trauma, congenital etc. Neuro Ophthalmic causes include third cranial nerve palsy and a condition called myasthenia gravis.

Myasthenia gravis is a condition of weakness of the muscle contraction due to abnormal chemicals (autoantibiotics) directed against the muscle receptors. This has a predilection to affect the eye muscles first producing ptosis as well as ocular misalignment producing diplopia (double vision). Muscles elsewhere in the body may also be affected subsequently.

Why is the ptosis and diplopia variable – better in the mornings and worse in the evenings?

This is due to progressive muscle fatigue towards the end of the day and they need more chemicals to get stimulated which is in short supply in myasthenia.

What will be my other symptoms if other muscles are affected ?

It can affect the other proximal muscles of the limbs which can lead to difficulty in lifting objects or difficulty in getting up from squatting position. It can also cause difficulty in swallowing or breathing.

What is the chance that my other muscles will be affected other than the eye muscles?

Usually 60 – 80% of the patients start with ocular symptoms but half of them will eventually develop generalized symptoms within the next 2 years if left untreated. after 2 years the possibility of involvement of other muscles is low.

How long will i have to continue drugs?

There is no absolute cure for the disease and only the symptoms may be relieved. Immunomodulators like steroids and immuno suppressives may eventually cause remission of the disease in some patients.