What is meant by visual field?

When we look straight at an object we see not only the object focused on, but also the objects to the side of it, which is defined by limits on all directions. this is the visual field.

What are the various disorders of the visual field that can occur? 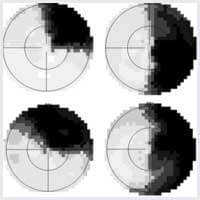 What are the causes of the visual field defects?

Scotoma is a non seen area within a seeing area. it can be due to disorders of the optic nerve, the nerve which connects the eye to the brain or macular problem-the central area within the eye which is responsible for central fixation of the eye.

Homonymous means same side of the visual field in both eyes . this occurs in the back of the brain where part of the nerve fibers from both the eyes join. it is usually due to interruption in blood supply to the nerves (infarction) and occasionally due to tumours.

This means the temporal field (outer field) of both the eyes are affected. this usually occurs in the base of the brain where the nerves from both the eyes cross each other at the optic chiasm.

The most common cause is the pituitary adenoma – a beningn overgrowth from the pituitary gland – the master gland that controls all other endocrine gland within the body – when it is grown to a considerable extent.